More Success for Ableworld as they continue their expansion plans

SINCE Ableworld was founded in 2001 by Mike Williams, the company has grown rapidly into a highly successful nationwide firm with 32 stores and plans to expand across the country in the next few years.

Ableworld’s recent growth model of opening stores under its franchise has resulted in retail units being opened from franchise territories in Inverness in the north to Southampton in the south, Colchester in the east to Cardiff in the west. 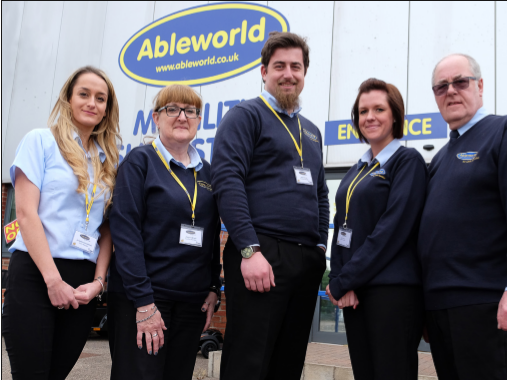 To facilitate these two franchise store openings Ableworld formed a new 100 per cent owned subsidiary called Mobility North East Limited and employed an experienced Regional Manager to oversee the operation. Once the stores are up and running profitably, the plan is to offer them as ‘ready-made’ franchises, then turn its attention to other areas it has identified in the North-East, including Newcastle and Sunderland.

“In our opinion there is no reason why our successful franchise model cannot operate here,” said Franchise Director Paul Boniface. “We want to prove that by setting up our own stores in Darlington and Stockton then inviting franchise partners to join us as we establish our brand as not only the largest in the country, but the largest in the North-East as well.”

One of the key projects for the NorthEast has been the development of Ableworld’s award-winning stairlift division, which it was felt was not operating at its full potential. Following the recruitment and training of a local stairlift engineer, that side of the company is already showing signs of doing the sort of business expected from one of Ableworld’s superstore mobility outlets. In fact, the Stockton store as a whole recently broke company records for the first month’s sales, proof if it were needed that there is plenty of business in the North-East.